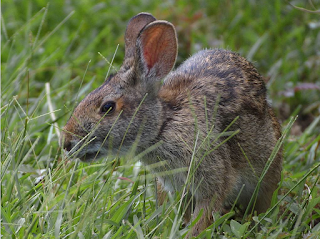 Above is a picture of the last rabbit Steve Jobs would ever want to come across in a blind alley.

Below is a complaint letter from Reggie, the world's most frustrated lagomorph, detailing his issues with the wildly popular Apple iPad.

Dear Apple,
I hope all is well over in Cupertino.  I’d love to check the weather there -- but my iPad won’t respond to the touch of my fuzzy-wuzzy bunny paw.  WTF, Steve Jobs? W...T...F?!
You think I slaved away stealing four hundred ninety-nine dollars worth of goddang parsnips and yams from that d-bag Mr. McGregor’s farm for nothing?
Considering I can only count to five, four hundred and ninety-nine is a shit ton of crap.  Do you even know how many rabbit turds are in a shit ton of crap? I sure don't know.  I’d love to ask Wolfram Alpha -- or hell, I’d stoop to use Yahoo, but again, I’m too friggin’ fuzzy to interact with your “game-changing” device. Game-changing my woolly cottontail butt.  Part of me really wants to go all Bunnicula on your ass.
Well, Apple, that’s really all I have to say.  I guess I’ll just invite my pals Christopher Robin, Donnie Darko, and Brer Fox over so they can take turns playing Angry Birds while I sit and watch...sick with envy.
-Reggie Rabbit
Posted by Unknown at 12:08 PM 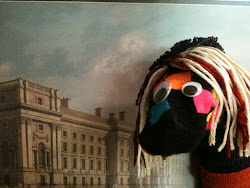